In what circumstances do marmosets groom each other? 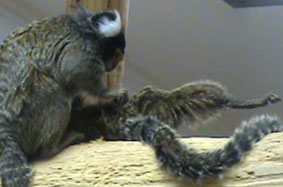 In what context do marmosets give “tsik” calls? 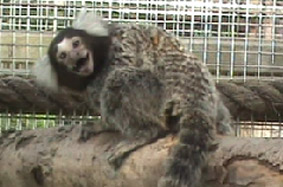 Comment: The tsik call is heard in the context of anxiety and aggression.

How would you interpret this facial expression? 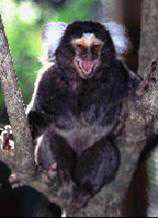 Comment: This facial expression is a bared-teeth grin a submissive response to aggression.

How would you interpret this behaviour? 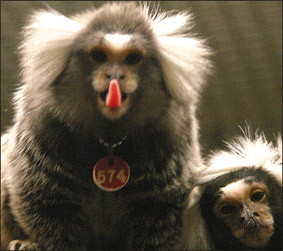 Comment: This behaviour is seen in the context of sexual behaviour.

How would you interpret this facial expression? 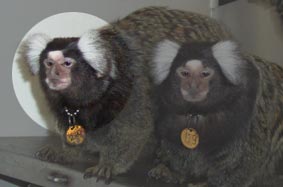 Comment: This facial expression is a slit-stare, a submissive response.

Your (male and female) marmosets show a marked increase in anogenital scent–marking. Why?

Comment: Excessive scent marking in captivity is a negative welfare indicator. It increases following a cage clean and therefore it is best to transfer some scent with the marmosets (e.g. do not change all branches simultaneously).

Increased locomotion can be seen in response to? 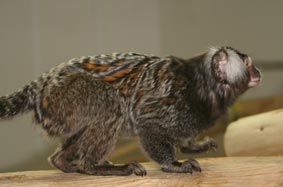 Comment: Changes in the quantity of agitated locomotion can indicate changes in welfare state. Locomotion can increase for several hours after a stressful event and in response to novelty.

Self-scratching increases in response to?

Comment: Self-scratching is mainly a negative welfare indicator and especially if excessive.

If you heard this noise would it be...

If you heard this noise coming from the colony rooms would you...

Comment: This extended squeal call indicates that a marmoset is being bullied by another group member. This situation requires immediate attention.

In which context would you be most likely to hear this call?

Comment: This call is the rapid-fire tsik or the mobbing call, a negative welfare indicator if persistent. If you hear this call when you enter the room you are probably viewed as a predator.

Comment: This is the whirr call, a within-group contact call and the most frequently heard of common marmoset calls.